The new vulnerability CVE-2016-2183 [1] affects the 3DES block cipher. It can be found in software like OpenVPN, OpenSSL, Apache Server, etc. During an attack, attackers need to find a collision of any encrypted block of CBC data stream to decrypt the traffic between the victim and the server.

The Green parts represent shared secrets - exchanged between the sender and the recipient (using asymmetric cryptography at the beginning of the communication. you don't need to know more because it's not related to CBC or SWEET32).

Initialization vector (IV) is randomly generated by the sender. In an encryption process, IV is used to XOR the plaintext to produce a randomized first block. This means that CBC produces different output for the same plaintext for different connections. The Key, used as a password for symmetric encryption of transferred data, stays the same for the whole connection. This operation produces the first ciphertext block. Then, the first encrypted block is used as an “IV” for another block, etc.

Decryption works the same way but in reverse order. The key is used to decrypt a data block; then the IV is used to XOR the data and as a result, we can see the first block of data in plaintext. The encrypted block is then used as an “IV” input for second block etc. Easy.

The role of data block collision

Please have a look at the following diagram.

Let’s imagine the attacker can generate the plaintext, for example, all zeroes. The text has two blocks with the same content, represented by the green “block cipher encryption” rectangle in the diagram. The key is the only unknown which can be calculated from other green parts. Voila.

The attacker use collision to calculate the symmetric key, and thus, decrypt a 8kB-block of data from the sender. The attacker then needs to find another collision to decrypt the next 8kB of data.

As you can see from the diagram, CBC mode of operation security is related to the uniqueness of IVs. IVs length is the same as data block (you need to XOR all blocks of input data.) DES encryption uses data block equal to 64 bits, so do 3DES and Blowfish. The block length is not related to the key size, so even Blowfish-256 data block uses 64-bit length.

When an encryption with data blocks equal to 64 bits is used (e.g. 3DES, DES, Blowfish), we have 264 of possible IVs combinations. For 512 bytes long requests, this represents 1024 exabytes of data without the IV collision. I don’t want to capture this amount of traffic. But because of the well-known Birthday attack, the number of possibilities is significantly reduced to 264/2. For 512 bytes long requests it represents only 256GB of data to be captured.

AES and Twofish use data blocks with 128bits length which results in an enormous amount of traffic to be captured in order to find a collision.

IVs or nonces are used by other modes of operation like CTR, GCM, OCB, etc. The only difference is that other modes calculate the IVs differently. It's easier to preserve the uniqueness of the IVs, so it's difficult although not impossible to perform the described attack.

Prerequisites of a SWEET32 attack

SWEET32 attack can be performed only when certain prerequisites are met. And it is worth to say, that it is not easy to do it. Consider yourself:

Not an easy attack, but do you want to risk it?

How to protect yourself from a SWEET32 vulnerability?

Protection against SWEET32 is related to attack prerequisites:

SeaCat Mobile Secure Gateway and SeaCat IoT platform do not use 3DES. Our technology configures only the two most secure cipher suites that do not contain 3DES encryption. We use exclusively AES with 256-bit key size. This cipher has 128-bit data blocks. We use AES in the GCM mode of operation.

All mobile and IoT applications secured by SeaCat technology are safe, and you don’t need to take any action.

If you have any question or concern, please contact support@teskalabs.com. Alternatively, look at our documentation to know more about SeaCat application security.

We help you to operate your mobile and IoT apps securely. You may have noticed that OpenSSL released a new version on February 16, 2017. The new version fixed one high-severity issue regarding renegotiation of the Encrypt-then-MAC (EtM) extension. 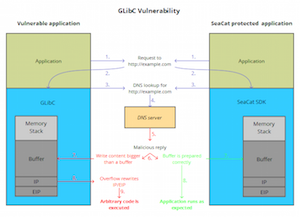 TeskaLabs, a Prague and London based startup in application security, today affirmed that their core products are not exposed to the GLibC flaw, a highly critical security vulnerability. There is now a rapidly growing number of IoT devices that use Linux as their operating system and inherently GLibC.

The new vulnerability, DirtyCOW, (CVE-2016-5195) exploits a flaw in private read-only memory mappings. However, this critical impact vulnerability has existed in Linux for nine years and only got discovered recently.